Today, an international team arrived in southern Guyana, near the boarder with Brazil, to conduct a rapid biological assessment of the Rupununi Savannah, a sprawling tropical grassland peppered with rock outcroppings and forested mountains. Sponsored by the World Wildlife Fund (WWF) with assistance from Global Wildlife Conservation (GWC), our expedition will spend the next couple weeks capturing a snapshot of the immense biodiversity that occurs in this poorly known region.

Our group has about 35 people, including scientists, students from the University of Guyana, and support staff (a cook, drivers, representatives from local indigenous peoples). We have 10 scientific teams covering a broad array of biodiversity: large mammals, small mammals, fishes, amphibians and reptiles, birds, plants, aquatic insects, ants, water quality, and indigenous resource use (I’m in charge of the aquatic insects).

After assembling in Georgetown, we flew down to Lethem this morning, Tomorrow, we’ll load up into large Bedford trucks (so we can ford the rivers) and head out into the savannah to our first site at the foot of the Kusad Mountains. 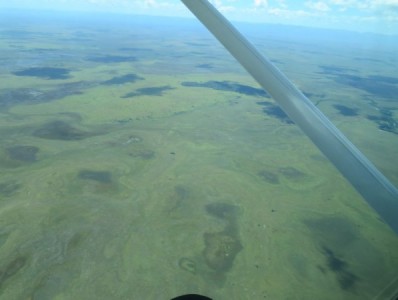