GEORGETOWN, GUYANA (April 1, 2013) – Demerara Distillers, Ltd. (DDL), of Georgetown Guyana announced the opening of the world’s first – and longest – trans-national tramway today in the remote jungle of South America.The remarkable engineering feat was financed by the Government of China and engineered by global transportation firm Skidmore Owens and Merrill (SOM).

Georgetown tour operator Wilderness Explorers has been selected as the exclusive booking agent while DDL has partnered with the Iwokrama International Center for Rainforest Conservation and Development to provide on-board service, educational programming, and catering.

Operating over an unprecedented length of 186 miles (260 km) between Guyana’s capital city and the centrally located Iwokrama rain forest, the tramway offers visitors a never-before seen glimpse at the rainforest canopy from the luxurious perspective of an air conditioned tram car breezing silently through pristine jungle at 30 mph (50 kmh) nearly 35 meters above the ground.

The system is powered exclusively by renewable energy sources including solar, biomass methane capture, and wind turbine farms positioned every 20 miles along the tramway route.

Specially programmed Apple iPads track the progress of the tram and use state of the art multimedia tools to educate visitors about special points of interest along the route, including rivers, Amerindian petroglyph sites, waterfalls, seasonal blossoms, illegal mines, and sacred mounds. An interactive feature allows passengers to while away the hours by learning conversational Makushi, one of the indigenous languages of central Guyana.

The culture group from Surama Village in Region 9 has recorded a special soundtrack that fills the cabin with the authentic sounds of people who have called this land home for centuries.

The journey from Georgetown to the tramway’s terminus at Kurupukari takes nearly 7 hours… slower than traditional air transport but considerably faster (and more comfortable) than terrestrial coach services which are notoriously hindered by mud and mechanical problems along the nation’s sole trans-national dirt road.

Scrapping plans to pave that road opened the door to urgent rounds of creative efforts to address Guyana’s need for a transnational transportation system that met the country’s economic needs as well as its conservation priorities.

A compromise deal struck by the government, private sector, and local indigenous communities permits local residents to ride the tram for free and provides cargo transportation in the nighttime hours when tourists don’t use the system. An analysis by the World Bank shows the cost to operate the tram service is actually 20-25% less than the originally planned surface route, with significant environmental and cultural preservation benefits.

An extension of the tramway from its current terminus at Kurupukari will link the system to Lethem on Guyana’s southwest border with Brazil, with stops at Karanambu Ranch and Maparri Falls.

Visitors who aren’t rendered unconscious by the tempting supply of unlimited on-board rum have the ability to briefly slow or stop their tram car should they encounter a canopy viewpoint of interest: nestling howler monkeys, a soaring Harpy Eagle, mating cuckoos, or possibly even a tree sloth making its weekly pilgrimage to the forest floor to defecate.

A triple fail-safe satellite uplink system guarantees a communication link between the engineering center in Georgetown with each passenger car. Each tram is equipped with sufficient provisions to sustain a group of 6 visitors for at least 48 hours should a mechanical problem or bad weather conspire to delay repairs or rescue efforts.

Biffy McDougal of London was one of the first visitors to journey through the Rainforest on a trial run of the tramway last week. “It was stupendous. Yeah, the rum caught up with us and we caught a quick nap somewhere in the middle of it, but the scenery was marvelous the entire way. We saw animals drinking from the river, a Harpy Eagle hunting in the canopy, and even a 12″ hairy orange moth that landed on our windscreen. Gobsmack!”

McDougal and his companions disembarked from the tram, spent a night at Iwokrama River Lodge along the Essequibo River before setting out on a weeklong river journey aboard silent electric canoes towards Rewa and Corona Falls in the heart of Guyana’s most biodiverse region.

The system currently handles up to 10 tram cars per day in each direction, a number constrained primarily by accommodation limitations at the Iwokrama River Lodge, Atta Raifnorest Lodge, and Surama Eco-Lodge in the Iwokrama rain forest.

Several nearby communities are capitalizing on growing tourism numbers by opening new ecolodges in the area. Fair View Village has just opened a dozen treetop cabins overlooking Kurupukari Falls less than a mile from Iworkama River Lodge, and a new 5-star hilltop annex to Rock View Lodge is due to open this spring. Unemployment in the area has dropped to zero.

Tony Thorne, a veteran in Guyana’s tourism sector, says that the tram project and its impacts on tourism entrepreneurship has raised the bar in terms of quality, comfort, service, and price competitiveness, not just in Guyana but for all of Amazonia. He says that Guyana finds itself in the crosshairs of marketing campaigns launched in recent weeks by stalwarts of the tropical rainforest tourism sector.

“Costa Rica is spending millions to promote its old-school tourism style, but no one wants to go there anymore. Everyone is talking about Guyana.”

This article was originally published on April Fools Day, 01-April 2012 and republished again on 01-April 2013 because it stirred up so many questions the first time! To clear up any possible confusion – this was an April Fool’s day prank, there is no arial tramway service in Guyana. If you are a deep-pocketed investor, however, we’re ready to talk. 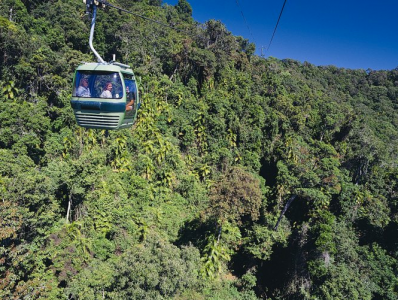 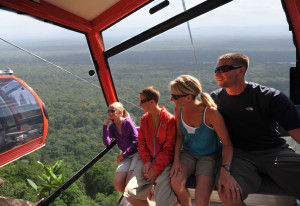