Another new species – this time a Plec is discovered in Guyana

Another new species – this time a Plec is discovered in Guyana

A new genus and species of a weakly armoured plec has been described from the upper Mazaruni River in northwestern Guyana. and was named by Jonathan Armbruster and Donald Taphorn as Paulasquama callis.

The head and body of most plecs are covered with bony plates, with only the belly, lower surface of the head and the area around the fins lacking plates. Paulasquama differs from most plecs in lacking bony plates in two oval areas on the top of the snout, and the bony plates below the dorsal fin being greatly reduced in size. In addition, thick skin covers much of the body of the catfish (which is unusual for a plec).

Paulasquama callis was collected from a swift stream with clear water having a slightly black tint. The substrate consisted of polished cobble and gravel.

The authors hypothesise that the numerous waterfalls in the drainages of the Pakaraima Mountains severely limit upstream migration and isolate the upstream regions. This would allow unique fishes like Paulasquama to evolve or to persist there. 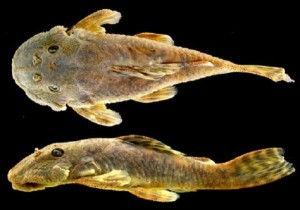