The numerical status of the giant arapaima fish ( Arapaima gigas )in its habitat in the North Rupununi wetlands is currently the subject of a survey funded by the United Nations Development Programme (UNDP). Members of the North Rupununi District Development Board (NRDDB), which is conducting the survey, have said they intend to release the results shortly.

Since the 1960s, concerns have been expressed about the fate of the fish, and the need for it to be protected. During that time, it was disclosed that the arapaima, which inhabits the Rupununi, was being ruthlessly harvested and sold across the border in Brazil, mostly by Amerindians.

The Guiana Graphic newspaper dated March 10 1963 had warned that unless something drastic was done, the then B.G would have lost a very valuable species.

The NRDDB was one of eight local civil society organisations (CSOs) which were recently awarded grants for environmental and livelihood benefits to communities under the UNDP/Global Environment Facility (GEF), Small Grants Programme (SGP). The NRDDB received the sum of Gy$9.8M to strengthen the capacities of its 16 Amerindian communities to manage the arapaima fish and fisheries of the North Rupununi wetlands via capacity building, arapaima surveys, conservation education and awareness, consultations, and development of management plans.

Richardson Haynes, the Fisheries Project Coordinator of the NRDDB survey, said the survey is being done rigorously. He stressed the specialness of the arapaima (arapaima gigas). The fish is one of the largest fresh water fish species in the world, grows as long as three metres (almost ten feet), and can weigh up to 200 kilogrammes (over 440 pounds). Moreover, the species is very rare.

Haynes said that fish is an essential resource for the Makushi in the North Rupununi. “As communities and populations grow, there are increasing pressures on the fisheries resource.”

He reiterated that the NRDDB has been working towards fisheries management and arapaima management, to ensure the livelihoods of the people in the North Rupununi.

The North Rupununi Wetlands encompass 16 Amerindian communities in an area that reaches Katoka Village on the Rupununi River in the south to Apoteri Village on the Essequibo River in the North. Overall, these wetlands are more than 11,460 square km or 1,146,000 hectares.

Originally published by the Guyana Chronicle on January 21, 2014. By Clifford Stanley. 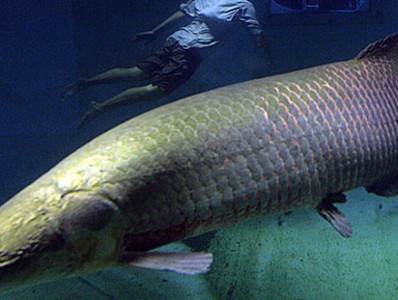