By Andrew Short of the University of Kansas Originally published by NationalGeographic.com, October 30, 2013

Our driver, Leroy, slammed on the brakes. The large Bedford truck behind us carrying our gear and most of our crew ran into a patch of think mud and was now sunk up to its axels and listing to one side. Up to now, our three-truck caravan had snaked its way towards to our first base camp without any problems.

We are here in southern Guyana to conduct a rapid biological inventory of the Southern Rupununi Savannah (Read more). Luckily, after some digging, wedging, jacking, pushing, and winching, we were able to get it unstuck and get to the Kusad Mountains by mid-afternoon. An advance team with WWF (World Wildlife Fund) had arrived several days before to clear a spot for our base camp, which was mostly set up when we arrived.

Not wasting any time, the aquatics team headed out to do our first sampling at 6am just as the sun crested over the Kusad Mountains the next morning. The 10 of us were piled into a 4×4 pickup and headed to take water quality and fish and aquatic insect samples from the Takatu River, which forms the border between southern Guyana and Brazil. Fortunately this 2-hour drive was much less eventful than our arrival from Lethem.

As leader of the aquatic insects team, I oversee the sampling protocols and collection of several groups on which we are focusing: beetles, true bugs, dragonflies, and caddisflies. Over the next two weeks, we’ll sample rivers, streams, and lakes across the southern Rupununi. Combined with the data gathered by the water quality and fish teams, we can generate a holistic picture of the health of the region’s watershed. 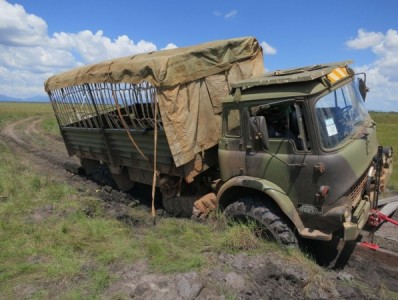