Intriguing remains of a culture long extinct have been unearthed in the Rupununi savannah close to Amuku Lake which in the 18th century was believed to be the site of the fabled golden city of El Dorado.

In June, Victor Pires, the owner of the Waikin ranch located in the North Rupununi, Region Nine was digging post holes outside the paddock when he hit a huge ceramic pot covered by another. The pot, which has all the characteristics of a burial urn, was excavated by employees and was in an
“almost perfect condition” except for a hole at the bottom. It is a unique situation for a burial urn to be found in a savannah environment buried in the ground, and it is the first time that such a find in the savannah has been reported, Guyanese archaeologist George Simon said.

He said that it was very likely that the urn is pre-Colombian as the Wapishana and Macushi do not practise this type of burial and ethnographicstudies have found that caves and other sites with burial urns are taboo in their culture. “To have found this tells us another story about the people
who lived in the Rupununi… far from the mountains,” the archaeologist said, calling the find important and significant. It shows how the people of the savannahs disposed of their dead, he said. 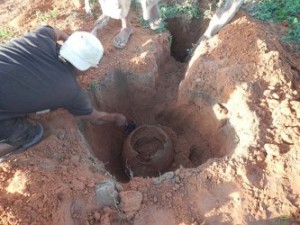